SUPPORT FOR THE SAVE WATERLOO DOCK CAMPAIGN IS GROWING

By the Save Waterloo Dock Team

What a week this has been for the campaign to Save Waterloo Dock!

Just over a week ago Unesco’s draft report on Liverpool was leaked, warning that Merseyside WILL lose its World Heritage status unless the council mends its ways - and naming West Waterloo Dock as one of their biggest concerns. That report was formally ratified on Tuesday. And although most of the Press and TV coverage portrays it as a battle between WHS and the new Everton stadium, this totally misses the point. Everton haven’t even put in a planning application yet. Romal/Peel have. And if the Romal scheme is approved, then WHS is finished - NO IFs, NO MAYBEs - before Everton’s stadium plans even get off the drawing board.

And as the reality of that situation has begun to sink in, powerful allies have come forward to join our campaign.

Hats off to Labour city councillor Nick Small, who represents our neighbours in Princes Dock, which is part of his Central ward. He has formally notified the city’s Planning Department that he is opposed to the Romal scheme and has told them he wants to speak at any Planning Committee called to rule on this horrendous scheme (see below).

And Hats Off, too, to SAVE Britain’s Heritage, which has also formally objected to Application 18F/3247, adding its powerful voice to English Heritage, Unesco and the many other experts who have already spoken out against it (see below).

We salute them all, and thank them for joining our campaign.

And here’s the proof

I am writing to make a representation on the above planning application.

The report currently being considered at the 43rd Session of the World Heritage Committee of UNESCO on the List of World Heritage Sites in Danger specifically mentions these proposals for West Waterloo Dock and states that the five Neighbourhood Masterplans for Liverpool Waters have not yet been reviewed and endorsed by UNESCO and advisory bodies alongside the proposed Tall Buildings Policy in the Draft Local Plan and proposed DSOCR in a comprehensive, joined-up and strategic context in order to preserve the OUV of the WHS and to avoid incremental overdevelopment.

I believe that this application ought to be considered in this wider overarching context by the Planning Committee and rejected or deferred until these policies and plans have been reviewed and endorsed by UNESCO and its advisory bodies and the Planning Committee fully understands the potential implications on the WHS.

Please include these comments in the Case Officer’s Report and invite me to the speak at the Planning Committee meeting at which this application is to be determined. 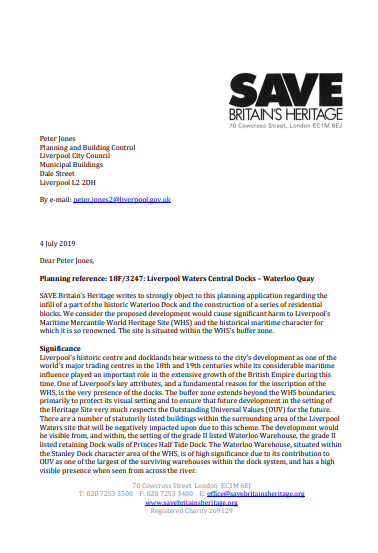 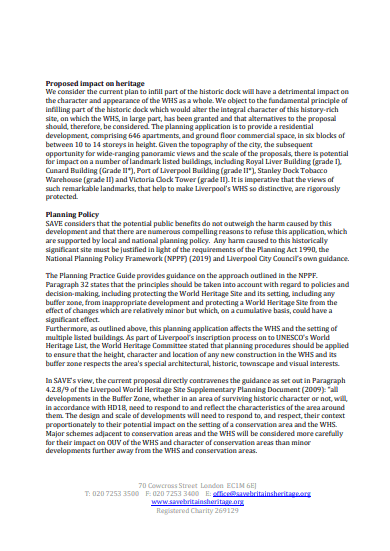 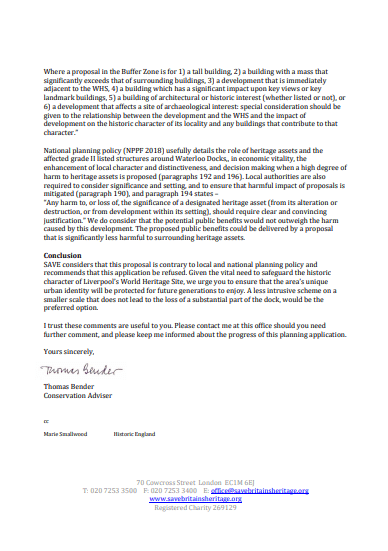